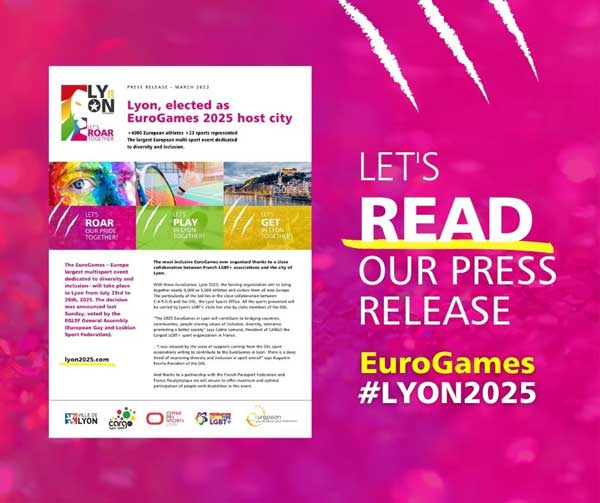 The EuroGames – Europe largest multisport event dedicated to diversity and inclusion– will take place in Lyon from July 23rd to 26th, 2025. The decision was announced last Sunday, voted by the EGLSF General Assembly (European Gay and Lesbian Sport Federation).

The most inclusive EuroGames ever organized thanks to a close collaboration between French LGBT+ associations and the city of Lyon.

With those EuroGames, Lyon 2025, the hosting organization aim to bring together nearly 4,000 to 5,000 athletes and visitors from all over Europe. The particularity of the bid lies in the close collaboration between C.A.R.G.O and the OSL, the Lyon Sports Office. All the sports presented will be carried by Lyon’s LGBT+ clubs but also by clubs members of the OSL.

“I was amazed by the wave of supports coming from the OSL sport associations willing to contribute to the EuroGames in Lyon. There is a deep trend of improving diversity and inclusion in sport overall” says Augustin Pesche President of the OSL.

And thanks to a partnership with the Fédération Française Handisport (FFH) and the Comité Paralympique et Sportif Français (CPSF), we will ensure to offer maximum and optimal participation of people with disabilities in this event.

”Our city of Lyon is extremely proud to host the EuroGames in 2025! The values of this Inclusion and Diversity have been at the core center of our principles.” Gregory Doucet, Lyon City Mayor

In addition to the sport competitions, these games will also display a strong cultural program, with the opportunity to leverage several renowned festivals in Lyon. And besides choir competitions, social and cultural happenings will be held in the city, as early as 2024, to promote the EuroGames and its values.

EGLSF congratulates Lyon 2025, CARGO & The French Federation of Sport LGBT+ on their successful bid for the 2025 edition of EuroGames. “Reflecting on this year’s bids, Erika Patrikainen, EGLSF General Secretary says, “Congratulations to both bidders. We have never had such a close result, and both bids were extremely strong and well supported. We have a fantastic momentum with our future EuroGames lineup until 2025. But in the immediate future we look forward to welcoming everyone to EuroGames 2022 in Nijmegen this July.”

Want to keep in touch with us?

A QUESTION ...
OR JUST TO SAY HELLO